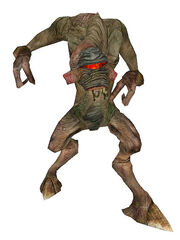 Vortigaunts are bipedal, with three arms, two legs and a head. They have backward-jointed legs, like a bird, a long, thin fingers that end in claws. Vortigaunts have green-brown skin, four nipples.

For as long as they can remember, the Vortigaunts have been enslaved. Hailing from an unknown plane .

They stayed hidden on Xen until the human scientists at Black Mesa opened a portal to it. The Nihilanth used this opportunity to begin invading Earth, sending hordes of Vortigaunts, headcrabs and other creatures into this new realm.

The death of the powerful Nihilanth actually made the rip in space-time worse, causing worldwide portal storms that

Roleplaying as an Enslaved Vortigaunt is a rather tedious process, you are essentially a janitor for the Combine and will be punished if you speak back or attempt to do anything outside what the MPF on duty tell you to do. Don't expect to have any extravagant roleplay as a vortigaunt as you are essentially a prop for setting the mood of the world, or something for the low ranking units to do. If you do manage to free yourself, it is suggested you have a very strong grasp on the english language and Vortigaunts as a whole (Learn from other sources outside this website, it's very corrupt and has plenty of misinformation) The Vortessence connects all Vortigaunts with low-grade telepathy, that does not mean all Vortigaunts have to be the same though, as they are not a full on hivemind. Humans generally do not take kindly to Vortigaunts as seen as dialogue between Vortigaunts and Humans during the Uprising. Due to the way Vortigaunts interpret language they may not understand exactly what humans mean, but they also return the confusion because the way they speak, cryptic and sage-like, they are exceedingly mysterious to humans. This is a highly passive RP focused faction, and should be only attempted by high skilled RPers. It is suggested you learn more about the vortigaunts from alternative sources outside the HL2RP Wiki if you want to learn about them, or watch compilations of vortigaunt dialogue to get a better sense of how they act and talk.

Relationship with the Combine[edit | edit source]

The Vortigaunts, like the humans, have been enslaved by the Combine, and do not take kindly of it. The

Combine mainly use Vortigaunts for cleaning and other menial tasks, and rarely, if ever, it's designated limits. However, if the Vortigaunt gains the attention and/or pity of a Resistance member or a kind Citizen, they may be able to free it.

Retrieved from "https://hl2rp.fandom.com/wiki/Vortigaunt?oldid=11156"
Community content is available under CC-BY-SA unless otherwise noted.